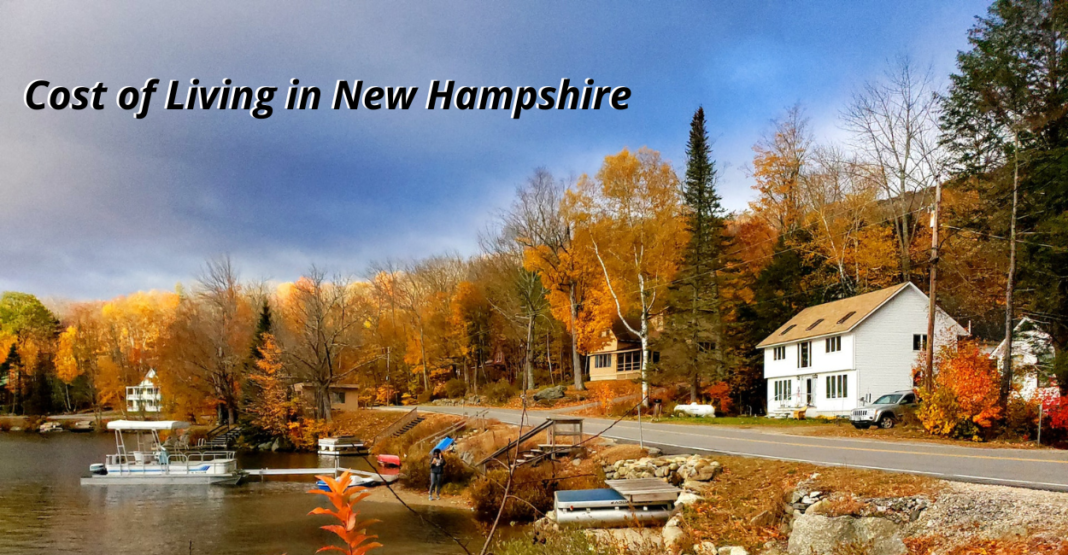 New Hampshire is one of the six-state New England areas. It is surrounded by Quebec, Canada, toward the north and northwest; Maine, and the Atlantic Sea.

New Hampshire has a reputation for being a state with a high standard of living because of its landscape and low cost of living.

The federal government’s lowest wage by law is $7.25 per hour. At the same time, New Hampshire’s state regulation sets the minimum wage permitted by law rate at $7.25 per hour in 2022.

Its also known for being one of the best places to work and do business because it has no state law concerning taxation.

New Hampshire is a place to be when looking for a lower overall cost of living.

Is It Expensive to Live in New Hampshire?

New Hampshire has a cost of living that’s positions marginally higher than the national average.

With the 6.0% increase in the cost of goods and services compared to the national average, New Hampshire is considered 9th position in the overall cost of living in the U.S.

Be that as it may, compared with more significant metro regions like Boston or New York, New Hampshire’s cost of living is somewhat reasonable.

How Much Money Do You Need to Live Comfortably in New Hampshire?

Although the minimum Salaries and wages in New Hampshire are almost the same as the national average, which is  $7.25 per hour.

However, the tax advantages are impressive, and the state has the absolute best standard of living in the country.

So therefore, you might want to earn anything nothing less than $70,000s to live comfortably in New Hampshire.

Although this is above the average salary, which is $65,421, following the 30% rule, you should not spend more than 30% of your total annual income on rent.

Is it Worth Moving to New Hampshire?

Financial factors like job opportunities and career advancement are considered in New Hampshire. There are low unemployment rates and a stable economy.

Visiting or living in  New Hampshire will also allow tax-saving on your shopping.

All the items you are purchased are sale-tax-free, and you will not also pay a state tax on your income if you are working in New Hampshire.

When talking of non-financial, New Hampshire has an advantage in areas like schools for the children, a serene environment,

good neighborhood with a place where you can enjoy outdoor activities with fresh air.

You can join the millions of people that flock to the state every year to experience their night at the best restaurant.

You will also enjoy skiing and hiking in the mountains, camping in the wilderness, and live concerts in the theater.

New Hampshire is otherwise known as a state where you can live with total freedom.

Because the state authorities are careful about passing regulations seen as hindering individual freedom.

For example, New Hampshire doesn’t expect an adult to wear a safety belt while driving or a safety helmet while riding a bike.

The Average Cost Of Living in New Hampshire

New Hampshire is a great state with many things to offer.

Whether you are keen on brilliant clamoring urban communities, taking off mountains, or huge natural forests, there are many things to appreciate in New Hampshire.

The city’s cost for most everyday items stacks marginally higher than the national average.

When analyzing the cost of living in any state or city, it’s a regular practice to look at the price to understand what makes up the cost item-by-item and city-by-city.

The average annual cost of total personal consumption in New Hampshire is $51,760, according to data from the Bureau of Economic Analysis for 2020.

Food is an integral part of the cost of living in any state because of its day-to-day expenses.

The average cost of food for a couple living in New Hampshire is around $6,629 in a year. In contrast, the U.S national average is estimated to be $5,939.

Housing is another significant part of the cost of living; the median price of a 2-Bedroom apartment across New Hampshire is about $1,153, with $54 in addition to the U.S. national average.

Health is wealth, they said; when relocating to New Hampshire, you must consider health care cost as it ranked as 2nd  least expensive compared to the U.S average.

Further analysis will reveal that a couple living in New Hampshire will likely spend around $6,646. In comparison, the U.S average stood at approximately $8,531, ranking as the 2nd least expensive.

In any state or city, transportation is significant in analyzing the cost of living. The estimated annual transportation cost in New Hampshire for a couple is around $13,030, making it $1,000 higher than that of the U.S.

For a proper analysis of transport costs, we have to look at gas prices in different cities across New Hampshire.

Note that the addition of a child into the family increases the total spending and cost of living.

Any family with a four-year-old child should be expecting an additional cost of around $9.9914, which is higher than that of the U.S national average.

Average utility bills expense vary from month to month, including power, heating, cooling, water, and garbage for a 915 square foot house, is separated by the significant urban cities in New Hampshire, is stood at an average cost of $477.02 per month, which make it rank in 6th position of those state the has the highest cost of utilities.

New Hampshire is one of just nine states in the U.S. that doesn’t impose an additional tax on wages and salaries, which somewhat makes sense below the regular tax payments.

Every expense differs as much from one state to another as tax assessments. Charging for state and federal personal income taxes, the typical adult working in New Hampshire pays $5,713 yearly taxes while the national average is $6,542.

Even though visitors come to New Hampshire during each of the four seasons, the most significant number of visitors visit throughout the summer.

By every measurement, New Hampshire’s travel industry expanded consistently somewhere between 2011 and 2019.

New Hampshire achieved this feat because of its relatively low cost of living, beautiful landscape, and its no Sale-Tax policy.

When next do you want to go for vacation, considering New Hampshire won’t be a bad idea.